I was lucky enough to attend Novel Writers in Bristol to hear Kit de Waal talk about her debut novel, My Name is Leon. I pride myself on being organised and prepared, but unusually for me I hadn’t managed to buy, let alone read, the book before I attended. With a 7 week old baby I was amazed that I even found out that the event was happening, and my wife did an amazing job of getting both children to bed on her own for the first time. 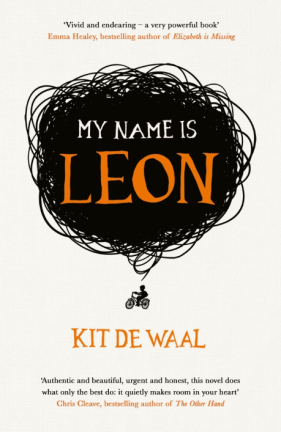 My Name is Leon is next on my list of books to read. I always have a book on the go, and although I hate to admit it, I am completely converted to using my Kindle. The Kindle was a very generous gift from my mother and father in law one Christmas, and I now feel that I would be lost without it. It allows me to read through the night without disturbing my wife, and I have read books that I would never have known about without the Amazon prompts. The holiday suitcase is also much lighter than it used to be.

From the reviews I have read of My Name is Leon, and the information I gathered at Novel Writers, Leon is a 9 year old boy who is separated from his baby brother following the decision of an Adoption Panel. The book follows Leon’s journey through foster care, and his determination to get his brother back.

The event took place at Spike Island, which describes itself as “an international centre for the development of contemporary art and design”. This was the first time I had visited, and it felt great to attend the evening in such a creative space. The event itself was presented as a conversation between de Waal and Nikesh Shukla, author of Coconut Unlimited.

The conversation between de Waal and Shukla flowed easily, and gave us a brief overview of the story of Leon. It was clear that de Waal truly ‘knows’ Leon as a real person, and not only the Leon we meet as a child in the book. De Waal also knows Leon as an adult, and would not reveal more than to say that Leon’s childhood has affected who he is as an adult. I felt that de Waal truly cared about Leon and the story that Leon wants to tell. To hear her talk about her book with such passion and love was truly inspirational.

I made some notes about de Waal’s writing process, including her process of planning, writing and editing. De Waal also mentioned some creative methods of really seeing the world through Leon’s eyes, which I thought would be helpful for ‘knowing’ and understanding your characters in great detail.

De Waal read from My Name is Leon, and it was easy to hear Leon’s voice in hers. The way that she has grasped Leon’s view of life came across immediately, so that I was transported straight into Leon’s world.

The evening ended with questions or comments from members of the audience, who appeared to be a mixture of writers, people who had read the book, and people who worked with looked after children and could relate to Leon. The questions were wide-ranging, from queries about provision for children in society, to writing methods, to Leon himself. It was clear that people in the audience felt moved by the book, and had really related to the characters and to the difficulties some children in society face. There seemed to be a collective concern about what we can do to help these so called ‘looked after’ children, who may feel anything but looked after.

On a personal level, attending the event gave me a sense of liberation. Liberation from the job I am currently doing, and liberation from the doubt I have about whether writing is truly what I want to do. The evening gave me the courage and belief that I can achieve with my writing, but also the understanding that it is enough to start on a small scale and just enjoy writing for now. The pressure that I had put on myself to start writing felt less, and the motivation I felt to actually make a start on something small appeared. I wonder if I will look back on that evening and see it as the impetus I needed to make the leap and create something new? I hope so.

My Name Is Leon is published by Penguin.

Edit: I have now read the book. I laughed, I cried, I was filled with hope. This is essential reading.

One thought on “An Evening with Leon”