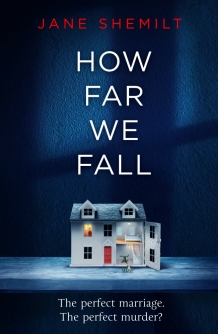 How Far We Fall is Shemilt’s third novel. Set between London and the Scottish island of Jura, it tells the story of Beth, Albie and Ted who are caught in both the past and the present in a web of lies, betrayal and loss.

Focusing on the medical careers of Albie and Ted, Shemilt weaves the story of a battle that rages between the two men as their ambitions are jeopardised. As neurosurgeons, they are pushed to their limits; an ongoing battle of power continuing between them until the desire to win pushes Albie to make a disastrous decision. Beth adds further complexity to the situation, and her presence in Albie’s life adds fuel to his fire.

Almost at the height of his career, Albie is close to achieving his life’s ambition. One by one, the threads of his career begin to come undone, until he is spiralling uncontrollably. In an attempt to stop the chaos he finds himself in, he makes further immoral decisions to try to cover his tracks. Despite being bound to Beth by the secrets they share, she has plenty of her own secrets that she has chosen to keep from him.

The Scottish coastal landscape provides a perfect backdrop for this book, and the wild, rugged imagery runs throughout the story. There is a satisfyingly stormy darkness to the themes of secrets, betrayal and long-lasting grudges, and the isolation of the island fits well with this. The characters are well developed and I felt I got to know them well.

The book took some perseverance to get into. A large number of characters were introduced within the first chapter or two, and I needed to pay close attention to understand what was happening. Once I had grasped this, How Far We Fall was a joy to read. I found myself completely immersed in the story and the characters, and gripped by Albie’s runaway train that refused to stop. How far we will go to protect ourselves, and to feel that justice has been done, is something to be feared.

My thanks to NetGalley and the publishers for allowing me to read How Far We Fall by Jane Shemilt. The publication date is 28th June 2018.